Receive a recap of our latest blog posts, expert interviews and product updates
Subscribe to our newsletter 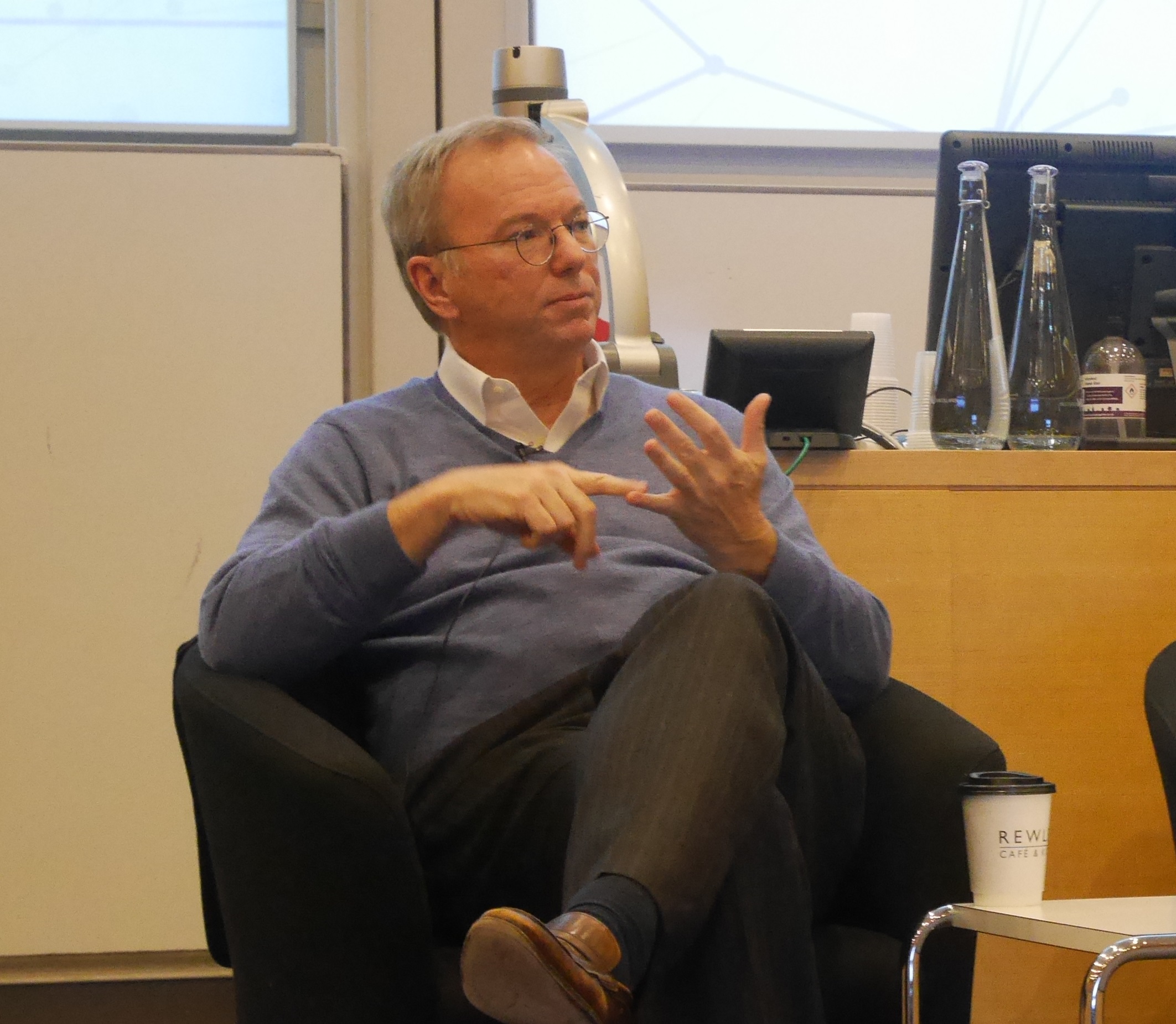 As Former Executive Chairman of Alphabet, Google's parent company, Eric Schmidt has a unique perspective on the changes that AI, machine learning and neural nets might wreak or bestow on the economy and society. He is not a bystander as most of us are, but is actively developing these changes — Alphabet is, he says, AI-first in the same way it was and still is mobile-first.

He's responsible for developing technology that could reshape professions and infrastructure, which means that he's thought about questions of social change and AI ethics with a sense of urgency few of us have.

Our CEO, Rajeeb Dey MBE, sat down with Eric Schmidt at the World Economic Forum Global Shapers Hub event in Oxford to discuss the fears and expectations around artificial intelligence and its role in the Fourth Industrial Revolution.

What do we mean when we talk about artificial intelligence?

It's probably the greatest opportunity for startups to make a lot of money! When I was a young computer scientist in the 70s, AI was going to take over the world. The claims made were extraordinary.

“What then followed is generally known as the AI winter, during which essentially nobody worked on it. This was partly because computers weren't fast enough at that time, but there were also procedural errors involved in the development of AI.”

Then a series of people including Geoff Hinton and others invented deep neural networks, which allow you to classify through many layers. That's started this whole conversation.

How do you think AI can improve our lives?

Today, we're at a point where computer vision is better than human vision, and language translation is nearing equivalence with human ability. Vision, text, images and speech are all essentially at human levels.

Many of the short term gains that you're about to see will involve relatively routine and repetitive operations. Computers have incredibly good memories and pattern detection, making them suited to automation involving pattern matching.

My best startup idea is a dermatology start-up, even though I know nothing about the subject. I would pay dermatologists a dollar to categorise pictures of skin as 'cancerous, non-cancerous, mole, etc' — whatever system dermatologists use. I would build a classifier from that data using machine learning. I would learn so much from this process that my diagnosis would be more accurate than an average dermatologist's. I'd then charge those same dermatologists two dollars for my more accurate diagnosis. This kind of vision-based job can be done better by a computer with a human supervisor than a human.

“This doesn't mean that those dermatologists would lose their jobs. I don't know about you, but I still intend to go to a human dermatologist. However, I hope that they would use my tool to give me a better diagnosis.”

Notice how I build this hypothetical business. I know nothing about dermatology — I'm an entrepreneur. We would use crowdsourcing for learning and data, and then use computer algorithms to better analyse that data. Indeed, Google has announced and released a library called TensorFlow which will allow you to actually build these systems.

What areas could AI potentially be used for the detriment of society?

Machine learning is applicable to any form of large, complex network. As one more positive example — we have the world's most efficient data centres. We had incredibly smart folks working on tuning and designing data centres to achieve that efficiency. When we used the algorithm I mentioned to you, TensorFlow, we saw a fifteen percent improvement over the best human tuner. This was seriously humbling for those Google people — the engineers who built the AI system are incredibly proud of themselves.

However, AI could be applied to automated systems involved in cyber war. It's not clear to me whether that gives one side an advantage, but it's something we have to think about.

Could the automation of jobs as a result of these changes lead to mass unemployment?

None of these conversations start from data, so let's start with some. What is the state of Britain's employment right now? It's pretty high, isn't it? How is it that Britain is one of the most automated societies and yet we have all these jobs? It flies against the dogma. There was a similar argument in America during the 1990s about Enterprise Resource Planning and Material Requirements Planning Systems and so forth — the computer people were going to take all the jobs. Over the last twenty years, the American job system has produced an enormous number of jobs, ignoring the errors of 2008, and America has its lowest level of joblessness in 30 years.

In order to be pessimistic about this, you have to convince yourself that this time is different. To me, that's supposition — we don't have any data to prove it one way or the other.

The manufacturing transition in the last thirty years has involved the replacement of crippling human jobs by non-crippled robots. We decry the loss of those jobs, but presumably the robots are a lot healthier than the humans whose backs were broken in steel mills over the last 100 years. The human operator of those computers is also paid more than the job which was lost. I'm not suggesting that there isn't very serious dislocation here or that some people don't wish to participate in this change — I understand those sentiments. Despite that dislocation, I think that we're not going to lose the full employment model.

In defence of my opponents, they argue that eventually these systems will be so successful that there will literally not be a need for some jobs. John Maynard Keynes wrote during the 1930s that his grandson would work something like ten hours a week. So much for that! I think there is a credible argument on the opposing side, but there's just no way to prove it.

Klaus Schwab's The Fourth Industrial Revolution points to the Oxford Martin Programme study, which suggested that 47% of American jobs are at risk of being automated over the next twenty years. How would you respond?

Will those 47% of people who are currently employed become unemployed? I think that those people will get new jobs and acquire better skills. You don't really automate jobs, you automate tasks. The general academic consensus is that jobs involving boring, repetitive tasks will disappear or be altered, which is consistent with what occurred in manufacturing.

“Let's pick a stereotype — Bureaucrats! I assume you have them here in Britain — we certainly do in America.”

The stereotype I have of a bureaucrat is a gentleman who's constantly frustrated, spends all day filling out the same paperwork, comes in at nine and leaves at five. If they have something else they can do, that person will be happier when that function is replaced by a computer. That person is not incapable of doing something other than filling out the stupid forms that they hate doing.

What sort of skills should we be teaching young people?

There is evidence that middle-class jobs are disappearing. The world is becoming divided between high-skilled jobs, which is everybody in this room, and service jobs.

“Middle-class jobs will be replaced by lower-class jobs. How do we solve this?”

The first solution is to focus more on education. In Europe, the educational systems at the collegiate and graduate school level are under-capitalised relative to the United States. The people in the faculty are of equal or greater quality — there's no issue of human capital.

“China is replicating the American model in terms of funding, investing a tremendous amount in universities. They'll soon produce world-class universities — and by the way, the Chinese are just as smart as us, if not smarter.”

The second factor is entrepreneurship. You need entrepreneurship to create jobs. Europe has not been particularly entrepreneur-friendly. For a while in Germany there was no limited liability law and they would throw you in jail if you failed. Everybody I know has gone bankrupt at least once — what kind of entrepreneur are you if you haven't taken a good risk?

We used to be mobile first, and now we're AI first. Well, I guess we're still mobile first too, and I think we've done a good job after some fits and starts. The history of our industry is that when transitions occur, incumbent companies aren't able to adjust. This is why we're mobile and AI first — to make sure we're ready for that transition.

“We used to be mobile first, and now we're AI first.

Machine learning readily applies to large data sets, a clear optimisation function and a large training opportunity. Well, what is search? What's advertising? What's Youtube? They all have a lot of users and data, and we can clearly see what we want to achieve.

“Self-driving cars are also an obvious example. Why in the world would you allow humans to drive cars? I understand the fun of it, but ignoring that, wouldn't it just be so much more sane to have a computer drive the car?

Will we ever see an AI on the board of Alphabet?

At what point will computer intelligence rival human intelligence in the terms that we think about it? Nobody knows. The optimists in the industry will tell you that it's ten to fifteen years.

Optimists argue that if you apply machine learning to concepts and planning, you'll eventually invent some form of imagination. If you have imagination, you have language, and then you can use the two to start training. We don't know how long that takes, but presumably they can train 24 hours a day. I think that we're probably a breakthrough or two away from getting to that point.

“I'm generally an optimist, but I'm not so sure on this.”

What is the ethical line with AI?

Well, everyone's seen the movie. The robot usually wins at the end! The serious answer is that there's going to be a lot more research on the subject of machine learning ethics and autonomy. We take the nuclear age for granted, but throughout the fifties there was a lot of thinking about how to respond to that development and its effects. I think there may be a similar response to AI. 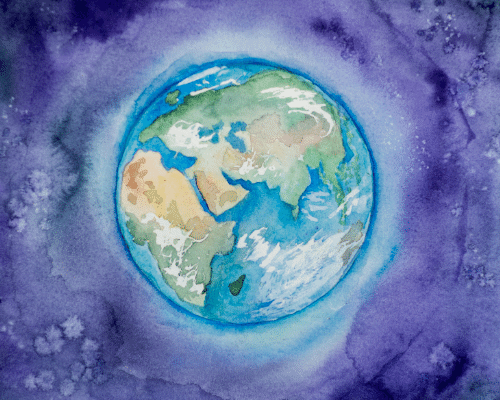 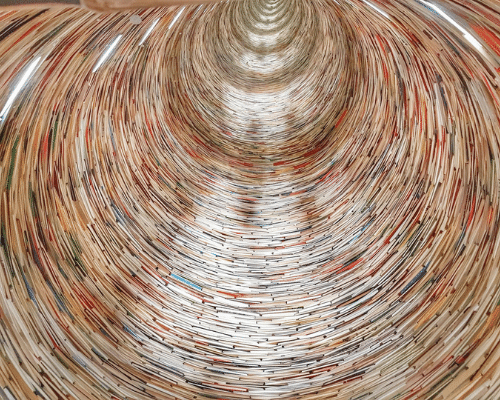 Continuous Learning: What It Is, Why It’s Important, and How to Support It

Continuous Learning: What It Is, Why It’s Important, and How to Support It 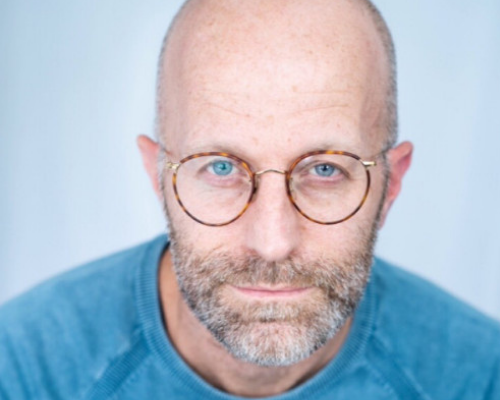 Aligning global benefits with culture: a conversation with Andy Meikle of HelloSelf

Aligning global benefits with culture: a conversation with Andy Meikle of HelloSelf