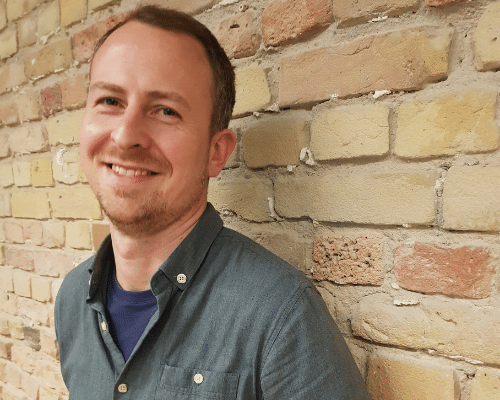 Diagonal Progression and Nurturing Your Network: Managing Your Development with Chris Brown

Developing your own network is one of the best things you can do, for yourself and for other people. Getting the chance to learn and grow from other professionals is crucial, but don’t underestimate the benefits of casual conversations with people who face the same challenges as you. You might be surprised by how in-demand your own expertise and experiences are, too.

Chris Brown, once of Soundcloud, N26 and Zenjob, now freelancing and interim Head of People at cargo.one, places a premium on being willing to take good ideas wherever you can. Should we focus on what the numbers tell us, or do we need a more qualitative approach?

Despite being a pioneer of people analytics, Brown advocates a mixed approach guided by goals; data is good, he says, but you can’t quantify your way to purpose.

Tell me about your journey into HR.

A combination of things over the course of my life kind of pushed me towards it. When we moved to Germany, I was looking for an opportunity to build on what I'd done previously. It was my wife who saw the position at SoundCloud. She said, ‘it's music, it's tech and it's recruiting, and you can probably do recruiting, so you should apply for it.’ Prior to that, I'd worked in career management consulting at Manchester Business School.

What were your experiences with SoundCloud, N26 and Zenjob?

I started somewhere at the bottom of the people pyramid, recruiting for some of the more business-orientated positions. Through that, I was looking at the timing of how the organisation was growing. Opportunities came up around our applicant tracking system. Nobody was really focusing too much on data and reporting, and I have a natural curiosity to understand things. We developed a recruiting operations function, supporting recruiters by looking at the systems and numbers.

So when an opportunity came up to do tech recruiting I jumped on that; when an opportunity came up to manage some people in our people operations team, I was very keen to do that as well and to bring those teams together. This is where I took my first steps with people management, starting off with an intern, which was not as straightforward as I thought it was going to be.

The team grew from one person to about five, then I followed my previous boss at SoundCloud to N26, where there was a broader scope and a much faster-paced environment. There existed a strong focus on employee experience — Are we in tune with the engagement of our employees, working with different survey tools? Also working on onboarding, internship programs and talent programs with the team — obviously, it wasn’t just me doing this.

When moving to Zenjob, it was another real step-up position: I’d never done a role with such a broad scope before, but there was a lot of motivation and support from the CEO.

Are there any cultural differences between Berlin and London that affect the people function?

It's probably more to do with the industry and domains than the geography, particularly in the startup scene. You see a lot of similar things happening, including a focus on employee development — partly because it’s widely recognised that people leave organisations when they don’t see a development path for them.

Since I’ve been in Berlin, among peers that I talk to, I’ve seen a strong focus on development and opportunity over hiring externally. But there needs to be a strategy around how that's created and nurtured as the organisation grows.

What development policies had you implemented at Zenjob and previous companies?

When you look at development, it's not just about somebody going from a level three to a level four. If you're involved in the hiring process, you need to be trained — you might be excellent at your job as a programmer, but actually, you've never interviewed somebody before, and also you come at it with some personal biases.

I was part of rolling out the training at Soundcloud, which really changed how we viewed interviewing. We do a lot more video calls now than in-person, but still, there was a big focus on how we train people to review CVs, how to write a job description.

I wasn't so much focused on the L&D side of things at SoundCloud, nor at N26, but I would be talking with my team about their aspirations and ambitions, and trying to understand how I can help support and coach people in the team there. If I didn't have that skill myself, I would look within my network.

While I was at Zenjob, we focused on mentoring programs. We already had a lot of talent, so we looked at how we can make it easier to connect people who don't have that experience. They also do something called Zenjob university, where people from within the organisation offer up training on particular topics that they're knowledgeable about   — the same as we did at N26 and SoundCloud.

There was more formal training, focused on being aware of where your limitations are, within the team or as an individual, and saying ‘maybe we do need to go externally and find experienced veterans who can roll out something as structured, focused and targeted as we need’.

Before COVID hit, there was an office but since then, there has been a deliberate decision made to be a remote-first organisation. This opens up many new countries where we can now hire talent - we currently limit this to a +/-3 hour time difference of Berlin. We’re a startup, growing quickly and still developing more formal policies around flexible work. I have two young kids and my wife also works in a startup - you can imagine how this also works now in lock down with homeschooling - and we’ve been able to manage our schedules pretty well so far.

How do you maintain a strong sense of company culture with a dispersed team?

You have to constantly keep your finger on the pulse: some people thrive off in-person interaction and energy, and others are quite happy not to have it.

How do you take the special moments and interactions that were previously part of everyday life in the office and translate these into a remote environment? This is where the focus needs to be.

How do you make new joiners feel part of the team when you're not physically in the same space? Not everybody wants to do something extravagant. Sometimes it’s having a video call and talking about something which is not work-related or watching a movie together. A lot of the time, it’s also something as simple as just being available to answer immediate questions and remove any blockers. You have to keep checking in with your people, and being vocal and being visible are definitely important from senior leadership as well.

How do you see the role of people analytics within the people function, and has it helped you in the work that you're doing today?

When I was at SoundCloud, I was really into the numbers side of things. I couldn't really see other people talking about it, so I set up a Meetup.

People analytics has definitely matured and moved on hugely since I started doing that, and some organisations are doing really fascinating things — particularly in the US where privacy is a little more relaxed than in Europe.

It’s very helpful to have some actual data when you want to make decisions, rather than basing them on guesswork and feelings, but there’s also the flip side: what are we really trying to understand here? If I’m going to do all this data collection and analysis, what is going to change as a result?

You talked about data privacy concerns. What are the risks involved?

We have to look at questions like, if we’re doing an awkward or difficult feedback cycle, should that be private from the person giving the feedback? People managers tend to want it more open and prefer 360° feedback that lets them follow up for more information as well as relationship building.

Some people are definitely more adventurous, or forthcoming, with information about themselves; Microsoft, for instance, collect all the relevant data on employees and give it to them, and say, ‘this is your data, now you can do something with it. It’s not our secret, behind closed doors: it’s yours.’

Of course, data privacy is also an issue, and you don’t want to oblige people to be more open than they want to be, which can cause all kinds of problems.

Are there any particular resources or communities, like Slack channels, that you think have been helpful in your role as a people leader?

Definitely. There are a few in Berlin, including one that I'm part of called HR Secret Society, which was very useful when I was first starting out and a great way of connecting with peers and allowing an exchange of knowledge, information, and experiences.

There's one I'm not part of called Purple Squirrel, that some people in my team are members of. Others are more international, which is also good because you get different perspectives.

I started off with HR Secret Society, and then I was invited to the Senior Leaders one. Being part of those networks is helpful, and it’s very important that you’re as visible as possible in there as well. It's about giving as well as taking, something I've had on my mind because I've not been that active in it recently.

What is one key lesson that's been really pivotal for your career?

It’s really crucial to talk to people in similar industries, similar roles — and different industries and different roles. Nurturing my network has paid back hugely for me: You can ask questions and discuss topics with your professional network that nobody else would be able to understand. There are very few people you talk to about the detailed challenges of your role, and it was a huge relief to me to become part of a network where I could receive great advice and the reassurance that I wasn’t in this alone. It’s obviously crucial to contribute as well!

That would be one thing I think that everybody should focus on.