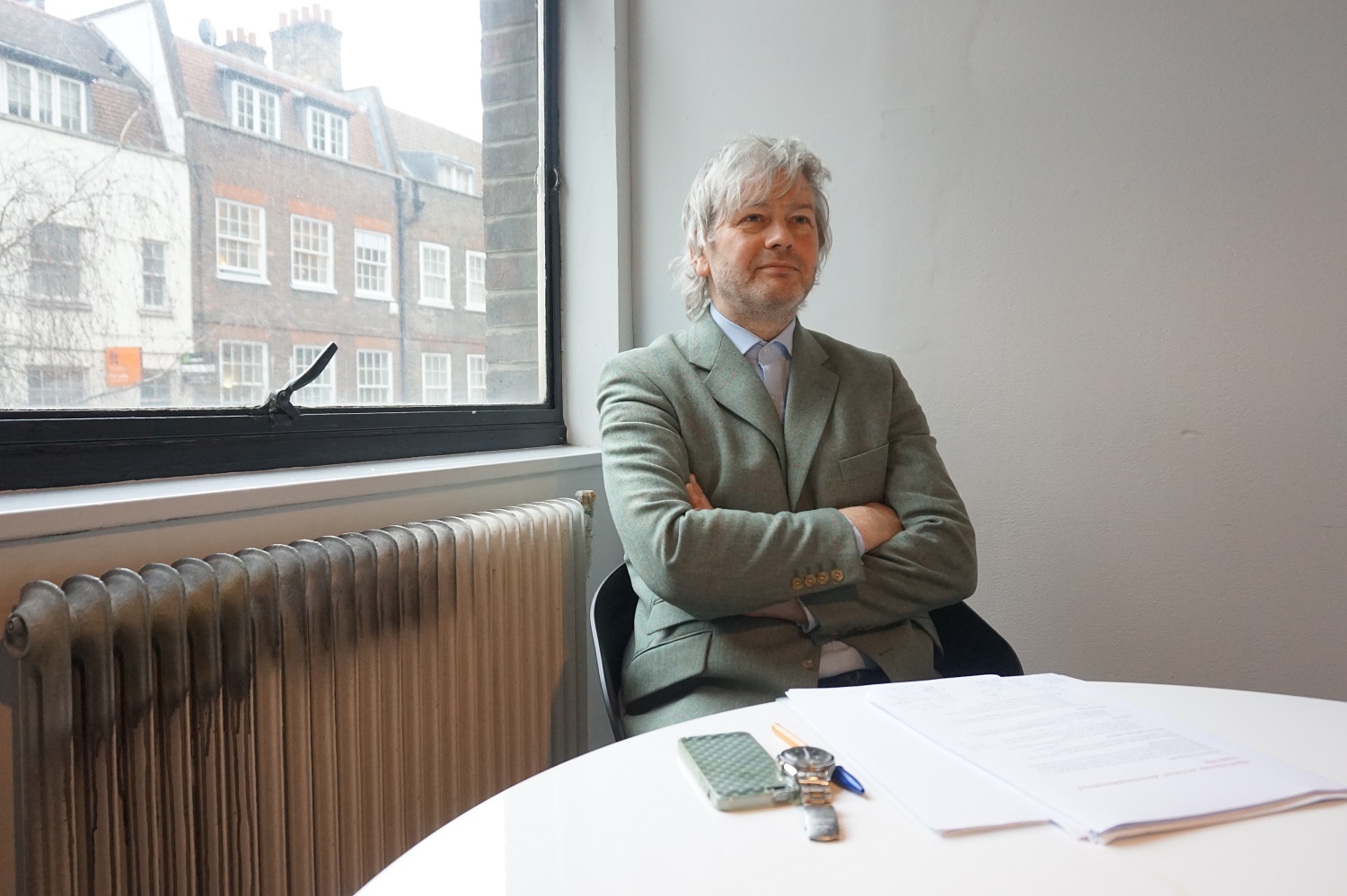 “Lift as you climb”: Jim Carroll’s Lessons on Authentic Leadership and the Amplified Self

A Classics scholar who grew up with punk and soul, Jim Carroll was a perfect fit for the analytical and creative world of advertising. He combines an insightful understanding of the world of brands and marketing with an adman’s eye for a line, most succinctly expressed in his idea of the amplified self. By this he means that the most successful leaders he’s worked with all amplified their best qualities to create their own leadership style.

He spent most of his career at Bartle Bogle Hegarty, eventually becoming the UK chairman, until retiring from the role in 2015. Nowadays Jim advises clients on brand and communications. He also trains, coaches and writes about commercial creativity at jimcarrollsblog.com.

‍I grew up in Romford, Essex, during the 1970s and ‘80s, which gave me a passion for soul and punk music. I was also a swotty kid and studied Classics at Oxford. I had always assumed that your career should be driven entirely by your academic skills and that I would have to become a civil servant. I didn’t realise until later that your passions and enthusiasms are as important to your choice of career as your academic credentials. In advertising I found a fusion of my rigorous academic side with the emotional, passionate aspect I’d developed through music.

My father worked for a gasket company, and used to be given free corporate diaries at the end of year. He once received one from an industrial felter:

“It had a slogan inside: ‘you need the felt, we felt the need’. I remember that line as one of the funniest things I’ve ever come across — that was when I worked out that I liked the small and shiny world of advertising.”

How did you start working in advertising?

‍I wasn’t able to get into advertising straight out of college, but I figured out that market research fed advertising and was suited to brainy kids, so I became a qualitative market researcher for two years at the Strategic Research Group. It got me up and down the country talking to lots of different consumer typologies, which was a very good schooling in the world of marketing. My last research job was for Bartle Bogle Hegarty (BBH), who contacted me once I’d started working in the agency world. I joined in 1991.

‍From there, what was your progression to becoming chairman of BBH?

‍Everyone in their career is playing a game of stick or twist. At critical junctions in your career you have to decide whether you stay or go. I’m an advert for sticking. Each time I reached one of those points, I decided to stay. I’d always felt an outsider within the industry, and I felt that BBH welcomed outsiders — I wasn’t confident I would be as comfortable elsewhere. Eventually lots of people left and so I became chairman.

‍What did you learn at the key junctions in your career?

‍I had a complacent view early on that just being the brainy kid meant that you’d be a good planner. When I joined BBH there were lots of clever kids so you needed to be distinctive.

“Looking back, I learnt that you need to start your career with rigour, which earns you the authority to become a cavalier later on. You’ve got to make sure that you know your ABC.”

What is your concept of leadership and the amplified self?

‍I was asked to do a talk on leadership, so I reviewed my experience with the most compelling leaders I’d worked with to see what they had in common. One was fiery, visionary and passionate. Another was competitive and sporty. A third was more a puppet master and less a performer. Another was a philosopher king.

Knowing all of them very well individually, I realised that they were people with great virtues who had learnt to amplify those virtues on a bigger stage with a louder voice. Their leadership style was entirely derived from their own personality.

“I realised that great leadership is all about self-knowledge. It’s a difficult skill — ‘know thyself’ was written above the temple of Apollo at Delphi.”

This led me to reflect on my own 360-degree annual appraisals. There came a critical point in my career when I decided that I wouldn’t focus on the negatives but on the positives. I began to receive the same appraisal, and I realised that I was worrying about things I could never correct. These flaws are an integral part of me. You have to work on what you’re really good at already.

‍Were there types of leadership that were more effective than others?

‍While the amplified self is a timeless truth of leadership, I think that leadership is changing in response to the realities of the modern business. We’re moving into an industry environment increasingly characterised by partnership, co-operation and interconnectedness.

“I once heard a conductor say that he was ‘more a gardener than a mechanic’ in his attitude to conducting an orchestra. It’s an apt analogy — a gardener nurtures, encourages, and takes pride in the success of their garden, whereas a mechanic systematises and organises.”

How should leaders pursue self-development?

‍The early years of someone’s self-development are about learning the ABC. The middle period is learning one’s self and one’s strengths. In the third phase, if you become a leader, it’s learning to develop and nurture other people. One of the challenges of moving through a competitive business is that people may succeed by competing with their colleagues. As they move through the business, they have to realise that their leadership skills are defined by their nurturing skills rather than their individual performance.

“There’s an old civil rights slogan that sums this up: ‘We lift as we climb’. Lifting as they climb doesn’t come naturally to some people.”

What are the most important skills to have in the ad sector?

‍Advertising plays on dualities. It’s always about the combination of the rational and the emotional. As a result, you’re looking for people who have that duality themselves. I’ve always liked people who are both outsiders and empathisers, both enthusiastic and doubtful. People in advertising can be slightly irritating because they’re so upbeat and passionate. That enthusiasm is the oil in the machine.

On the other hand, the best people in advertising are also driven by doubt and skepticism. Beyond that duality, advertisers have always needed to be persuaders. I try to educate younger planners that being right is not enough — you’ve got to be able to persuade.

‍How have you developed your skills in advertising?

“I went into advertising thinking that I was a doctor. I could tell clients what their ailment was, prescribe them their medicine and they would dutifully take the tablets.”

Over the years I realised that attitude didn’t work, because clients got more confident and more expert. I had a crisis of confidence in the middle of my career in which I thought that no-one was listening to what I was saying.

In the modern business environment you do well if you position yourself more as a psychoanalyst than a doctor. The challenge of a psychoanalyst is to ask questions that get to the heart of what the client wants. Allow them to self-diagnose, describe where they want to get to, and what their brand is about. Usually the answer is in those discussions, not in you.

‍What’s on your learning playlist?

‍Peter Doyle’s Marketing, Management and Strategy is a textbook, but it was a great recourse for times of uncertainty. It addresses the paranoia that a lot of people in our industry have about not knowing how to do something. A textbook like this reassures you.

More recently I’ve enjoyed Paul Feldwick’s The Anatomy of Humbug for its historical analysis of advertising. I haven’t been on many courses, but the Account Planning Group do a good and noble job.

‍Explain your concept of wind-tunnel marketing — do you think it’s changed, if at all, over the years?

‍When I was a kid, I said to a friend, “Andy, have you noticed that all the cars now look the same?” This was the time of Ford Orions and Vauxhall Cavaliers. He explained to me that they all looked the same because they’d all been through a wind tunnel. It made the cars more efficient and effective — they’d run further on a tank of fuel — but it made them all look the same.

I thought about the wind tunnel twenty years later. In the past, beer ads, car ads or jean ads were rightly celebrated as amazing, superb and different. However, those of the present all look the same. There were very logical reasons why that has happened. We globalised and professionalised marketing. We established codes of practice that we pass onto young people.We made this discipline more logical, sensible and professional for very good reasons. Perhaps in doing so we lost the power of difference.

If you look at a lot of modern mass communication, it’s lots of happy smiley people with the wind in their hair and the sun on their back — it’s bland. La-la bland. La-la brand.

“We think that personalisation is a coffee cup and diversity is a casting issue.”

It does seem to have become worse, but there are positives. It’s easy to take the mick, but I think that the craft movement in bread and ale is emphasising individuality and tactility — we want more texture in our brands.