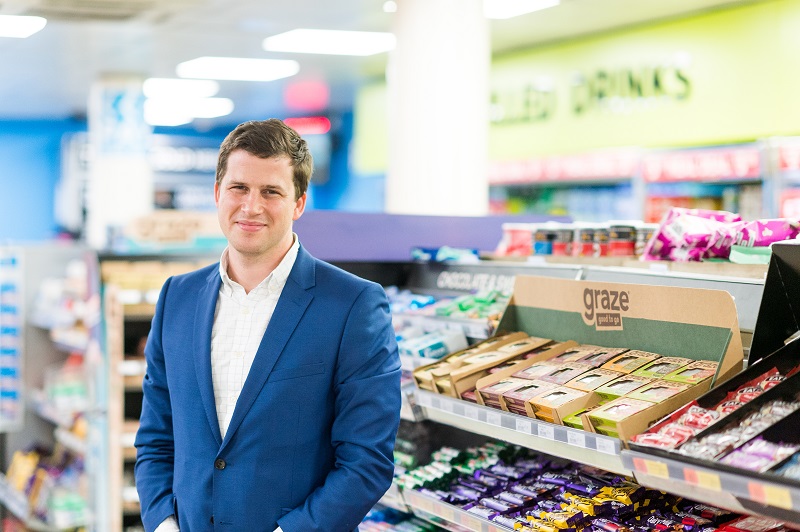 The Hardest Part of Starting Up is Scaling Up: A Conversation with Anthony Fletcher

As Anthony Fletcher, CEO of graze, points out, lots of books have been written about corporate strategy, and loads of books about start-ups, but very little about how you get from the latter to the former. It’s hard enough to start up a business, but scaling up that successful idea produces a new set of challenges. In response, entrepreneurs need to learn new techniques and processes for dealing with these problems. Luckily, Anthony Fletcher has done it twice.

Our vision at graze is to use technology to build the world’s number one healthy snacking brand. We’re an environmentally conscious healthy snack box delivery service. Technology is at the heart of our business — we receive fifteen thousand product ratings an hour from our grazers, so that makes us very responsive to consumers.

What has been your career journey?

I have a very traditional background. I trained to be a research scientist, but I’ve always wanted to be an entrepreneur. So I went and did the next best thing, which was to go and join what was a very small company at the time — Innocent Smoothies. I stayed there for seven years and went on this incredible journey. Innocent gave me a fantastic playbook of the things you need to scale a business to bring to graze.

What inspired you to work at graze?

I was sitting in the Innocent Fruit Towers and I saw one of the first graze boxes lying around. I was blown away by the trends it embodied — it looked like some of the effects that technology had had on other industries were finally coming to food.

“So I got in my car, drove down and literally knocked on the door and asked them for a job. I think that went down well with them: entrepreneurs tend to like people turning up and proffering their skills, because they’re so busy.”

What are the challenges of scaling up?

The fundamental issues faced by the two companies I’ve done this with were almost identical even though these were radically different companies in different sectors. In the early days you have a small group of people who are incredibly passionate. Communication is natural and the values are self-evident. As you grow the company there are dozens of things which you need to put in place to ensure you can scale. For that to happen you have to evolve the organisation of the company: you have to put in teams and you have to put in development. You also have to work harder at communication, and you have to define your values.

“Moving from the start-up phase to the scale up phase is one of the trickiest things you have to do as a leader. As I talk to other CEOs in this space, I’ve found that it’s often the organisational issues, not issues of strategy, which have been crucial to their success or failure.”

How do you conceptualise scaling up?

The way that I think about scaling up is as a line, running left to right, which has thirty events or issues on it. You can’t tell what’s going to happen, or in what order, but if you’re aware of running into a potential problem or change then you’ll be able to diagnose what’s going on more quickly.

“Of course, one of the difficulties is that you only have a limited amount of energy as a CEO, so focus is key. You’ll come a cropper if you ignore these issues, but you’re only going to be able to pick a few off at a time to really deal with. ”

It surprises me that when I go to a bookshop, I see a lot of books about strategy from a corporate viewpoint and then an endless number of books about start-ups. I’m convinced the toughest thing is scaling up your business — if you look at the number of businesses which go from £10 million to £100 million, it’s very small. It’s often not the strategy, but the issues I’ve identified — the organisation of the business and communication.

I’ve done the Elite program with the London Stock Exchange. I’m also a member of Tech City — in fact I’m a scale up coach for them. I’m a member of Critical Eye, which is a network for CEOs.

I’m a big fan of the well-known book Good to Great, which has this brilliantly simple analogy of getting the right people in the right seat on the bus, which you can extend significantly. I think that book has stood the test of time.

What are the values of graze?

We have five main values. The first is to be pioneering. We’re a technology company, and tech companies need to try lots of new things. What we mean by pioneering is not just a willingness to experiment, but also an understanding of the right ways of trying something new: whether that’s Minimum Viable Product or Failing Fast.

Curiosity is our second value. We believe graze will succeed by being outward-looking and taking nothing for granted, because the world is changing very quickly. But this is also important in another sense:

“We call it the Meritocracy of Reason — it just means that everyone in the company should feel comfortable asking ‘why’ or ‘why not?’ A good idea can come from anywhere — hierarchy can be a dangerous thing.”

Our third value is to be commercial. I have an unusual take on this one. You need to focus on your net profit or your cashflow in order to focus on your consumer. If there’s a problem with either of those things, you can ultimately trace it back, especially as a consumer goods company, to ‘are you serving the customer well?’

An unusual one is to be resilient — I’ve never come across another business which has this as a core value.

“If you come to graze, you come knowing it’s going to be hard and challenging work, and that you’re going to try lots of things which are going to fail. You’ve got to be good at taking those knocks and dusting yourself down.”

There are some people who are naturally very good at this, but you can also train yourself to be more resilient.

Finally, you have to be helpful. If you’re a team, if you’re going to help each other in a high pressure environment, if you can come together and help one another — then you can do impressive things. I’m proud that this value gets the highest score when we poll the graze employees.

What role does data and technology play at graze?

I think that there are four ways that graze uses technology to add value in the food industry, and data is one of those. The others?

“Technology gives you more and better ways to build your brand; it lets you build new models for innovation; and it lets you be a new type of business — in our case, we’re a multichannel consumer goods business. ”

But I think that our use of data has two really interesting effects. The first is that data increases customer intimacy and lets you know about your products in more detail more quickly. The second is the way that data enhances your business internally — if you implement it correctly, I believe it makes your business fundamentally different. The work we’ve done to centralise our data and make it more accessible means that people here tend to be very good at using it to make their arguments, decide what to do, and do those things more quickly.

Our use of data ended up being important when we were cracking America. We launched there three years ago with the UK product range. This wasn’t because we thought Americans have the same tastes, but because we wanted to produce and use a very large data set.

“This allowed us to rapidly iterate our product — so that within a year 90% of the range was localised to the US. ”

Were there other problems involved in expanding into America?

I think selling overseas is not particularly difficult. However, setting up international offices and operations leads to a step-change in complexity for your business — dozens of decisions have to be made. If you haven’t done the organisational change that I’ve talked about, then international expansion can really expose problems. I’d done it before with Innocent, so I had a reasonable idea of what I was getting the business into, but I do wish I’d had more time to develop the organisation of graze before expanding internationally.

What are the most important traits for leaders to have?

I know many people who’ve had a lot of success, and they’re all different. You do definitely spot certain traits, especially to do with desire or a determination to prove things for themselves. But the most fundamental trait is that good leaders have very good self-awareness. They’re able to recognise their strengths and weaknesses, and they know how to maximise and manage those characteristics though various techniques.

“At Innocent, I noticed that the three different founders all had periods in which they had their moment in the sun. They were all different characters, and their moment of prominence came at the time that the development of the organisation was most suited to their skills. ”

Is there anything else that you’ve learnt that’s really important?

If I were to talk about a mistake that I’ve made in my development, I was initially a bit introverted and spent too much time within the company trying to solve problems with my team. You have to be candid and a little vulnerable, but that’s when you have really interesting conversations.

One thing that I continue to think about is the recognition and management of talent in the different stages of a business. That’s a very tricky thing to do, and to get better at, and if I’d had more understanding and awareness of that earlier it would have been hugely helpful.

“I think that some of the best CEOs are incredibly good at quickly understanding people’s talents and how they’ll perform in different situations.”

Not every entrepreneur wants to expand their small business, and not every company needs to. But for those companies which scale up, making the jump in valuation from £10 million to £100 million is one of the most difficult periods of business development. As Anthony Fletcher points out, it involves dealing with problems of organisation and communication which only become apparent when it’s almost too late.